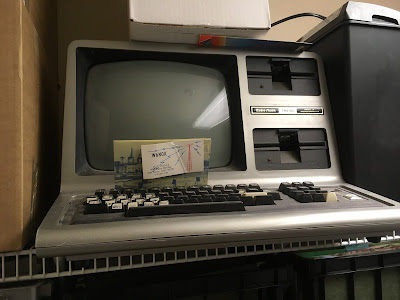 I was visiting my friend's parents the other day and spotted this on a shelf in a storage room. Whoa. Trash-80! The TRS-80 was made by Tandy/Radio Shack starting in the late '70s. I never had one, but I remember playing with them a little. 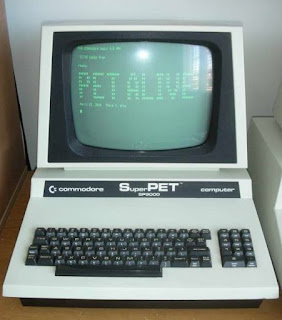 In college, my first computer was the DEC-10 mainframe. I figured out pretty early on that you could chat with people on other terminals, and there was a text-based game called Adventure (or Colossal Cave) that you could play on it.

Then someone introduced me to the Commodore SuperPETs in the Engineering School, and I learned how to use a word processor. A very primitive one, but way better than typing and retyping papers on a typewriter. Plus, it was in that brief, shining moment when you could tell professors that your paper was late because the printer was broken, and they would be impressed.

In the early '90s I had a notebook computer (now known as a laptop), a Toshiba T100LE. I would take it to a coffee shop and plug it in (the battery wouldn't last more than a hour or so). People would come over and ask me about it. "Wow, is that a computer?!?" 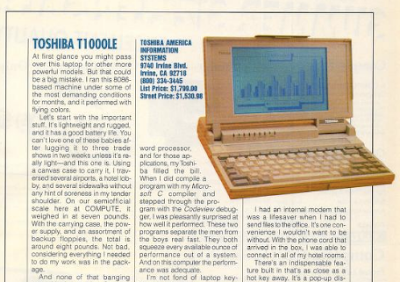 Yes, that's how much it cost, which is about the equivalent of $2,500 today. I used a chunk of my graduate student loan to buy it. It was totally worth it.

You'll notice it didn't have a mouse or trackpad. Those things didn't exist yet. "Back in my day, you whippersnapper, we DIDN'T EVEN HAVE A GODDAMNED MOUSE." Yeah, you had to use arrow keys to navigate around. You also used the arrow keys to play games such as Block Out, which was a bit like Tetris.

I ended up removing Block Out from my computer because I was starting to have dreams about playing it. (As you can tell from my continued Pokemon Go obsession, I have a hard time throttling back, so sometimes cold turkey is the best solution.)

Later I had one of those cute colorful iMacs (lime green!), and today I'm writing this on a Macbook Air, which is a great little machine and unimaginably more powerful than even that mainframe computer I first used that occupied an entire room.

What was your first computer?
Posted by Kitt at 11:08 PM