The mean streets of Denver When the streets are better suited to four-wheeling, you'd think it might be best to leave the $70K sports car in the garage.

This one was completely blocking the street, high-centered on its right side, with no owner in sight. (Probably somewhere trying desperately to raise AAA on the phone.) 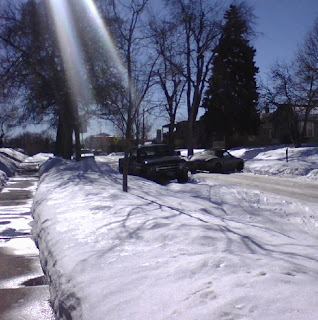 A few cars came down the street. Each crept close as its driver contemplated the wisdom of trying to squeeze between the pricey Porsche and the parked pickup. On solid, well-rutted ice. All chose instead to back up and find another route.

I'm reminded of a joke: A broke and desperate woman was trying to find work in a wealthy neighborhood. She knocked on the door of a fancy house and told the man who answered that she would be willing to do any odd job for $50. The guy, a real skinflint, saw his opportunity and said with a sneer, "Fine, you can paint the porch. There's paint in the garage."

About 20 minutes later, while he was still chortling and congratulating himself on getting such cheap labor, there was another knock on the door.