On San Francisco Bay, a pair of junks make their way toward the Chinese New Year celebrations last Saturday. It sounded like they were shooting off cannons, too, but it was hard to tell for sure. 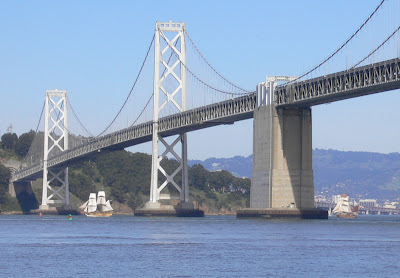 On Mount Tamalpais, fungus grows on a manzanita branch. In China I used to eat fungus that looked like this. "Cloud-ear fungus" they called it. (A darker kind is called "wood-ear fungus.") It didn't taste like much, and the texture was unpleasant. Better to leave it on the branch. 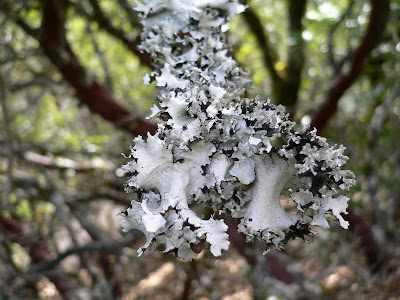 (Later: I shouldn't spout off without researching. That fungus is really lichen, though I'm not sure what kind. Possibly Platismatia glauca. But it looks like some of the fungus I ate. Really. Lichen is a symbiotic combination of fungus and algae. Who knew?)
Posted by Kitt at 9:13 AM