My bookshelves: an introduction

These are old photos, taken in ...2000? 2001? on this archaic medium you may have heard of called "film." The first photo is of my messy desk and craptacular fiberboard bookcases that I bought at a yard sale. Look! There's my old iMac.

The next photo is of Pascal, a woodworking genius. I was complaining to my welder (another story) about my inability to find anyone willing to build bookcases for a price I could afford. "What about Pascal?" he said. "He's a carpenter."

I knew Pascal from a friend's swing band. He plays a mean guitar. Turns out he also did a cabinetmaking apprenticeship in France. He looked at the room, gave me a bid, and I said, "done and done." Didn't check references, didn't even know about the apprenticeship at that point. He hadn't done a big job like this here before, didn't have many of the tools he needed, or any workspace of his own. But he bought the tools and set up shop in my garage. (Which was full of crap that I stored for some freeloading "friends" for a year and a half, but that's yet another story – and a lesson learned.)

The result? As Pascal would say: Voilà: 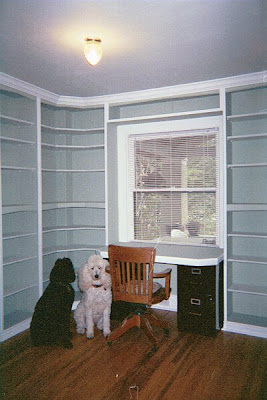 The design and execution are entirely Pascal's. I said I wanted the bookcases to be adjustable and to wrap around the windows, and I wanted crown molding. That was it.

Thanks to Pascal, the edges of the adjustable shelves are all beveled, and the skirt around the tops of the shelves is echoed by one on the middle shelves. The skirt also serves to make the shelves look the exactly same height all the way around the room, though the floor is not level. Hard to see those details in this photo, but trust me. He also did all the painting. It's a pale sage green (I did pick that).

So that's the background on the Great Bookcase Cleanup of Ought-Seven. Stay tuned.

P.S. The white poodle is the late, great and gay Doogie of the fabulous ears.
Posted by Kitt at 10:00 PM