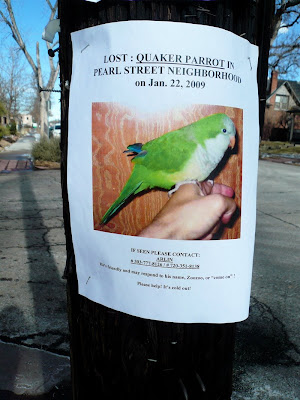 I always feel sad when I see signs for lost pets. This one particularly because I don't imagine a parrot could survive long here in winter. Telegraph Hill, we're not. Still, I hope Zoozoo gets found. I'm resisting quoting Monty Python.

When I was a kid, I had a series of parakeets, all named Paddington. One of them lived more than 10 years. The Paddingtons were allowed regular exercise outside the cage, and liked to imitate sparrows.

We also had finches named Henry, Henrietta, Raucous and Wretched. Their lives were a soap opera that ended badly and did not go into syndication. I believe it was Henrietta who escaped to the great outdoors, never to be seen again.