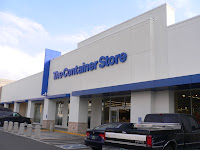 I love the Container Store, because I am a faithful subscriber to the fallacy that having the tools of organization will somehow, magically, make me be a more organized person. It works, a little, sometimes.

Today I was on a mission to get some food storage containers and something to use for a garbage bin under the sink, the only place I can keep one out of sight. I'd been using a cut-down copier-paper box with notches to hold a kitchen-sized garbage bag. Not very elegant. At the Container Store I found a cute little "toy bin" on casters that looked about right, until I got home and discovered the top was too big for the top of the bag. Argh. But all was not lost.
I just happened to have a stick-on hook in my (well-organized) junk drawer. Stuck it on and hooked the bag loop around it. Ta-da!
Dinner tonight, garlic yu choi with pasta. The recipe is from Jaden's Steamy Kitchen. I swear, it seems like I just follow her around cooking her recipes like some creepy blogstalker-fan, but I was simply Googling yu choi recipes, and that's what came up! Really!

What's interesting about this yu choi is that I bought it two weeks ago. It looked to me like something that could benefit from being stored as I do parsley, with the tips of the stems cut off and then stood upright in a mug of water, with a plastic bag over the whole thing. I did this, put it in the back of the fridge and then forgot I had it. Remembered today and expected to pull out a wodge of green rotted goo. Nope! Still crisp and green, and many of the flowers had opened up. That's impressive. 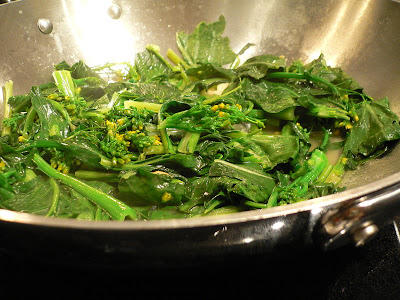 The recipe's easy-peasy. You brown whole garlic cloves in a little oil, toss in the chopped-up greens and stir them around a bit, then add a quarter-cup of chicken broth, cover and steam for a few minutes. 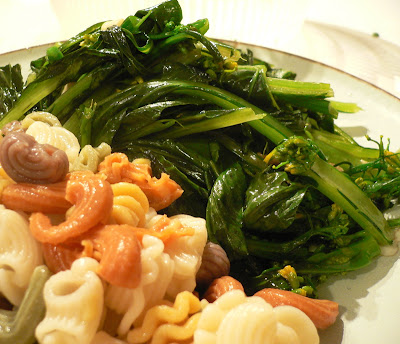 There was enough salt in the broth (even using low-sodium), and the pasta had some shredded parm on top, so this dish didn't need any extra seasoning. The garlic chunks are really tasty, too.

(This dish is not just dinner; it's also my entry for Kalyn's Weekend Herb Blogging two-year anniversary celebration.)
Posted by Kitt at 11:06 PM