Sophie and I got a long walk in this morning – maybe longer than she would have liked. But we went slowly and looked at a lot of things. 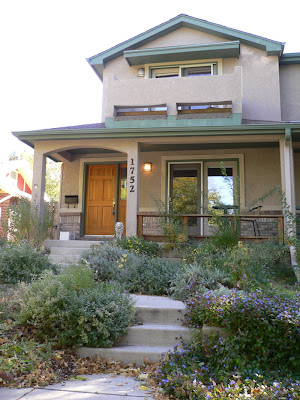 Found another building conundrum. This duplex is not too bad looking. Though it still doesn't match the character of the neighborhood, they did do some decent landscaping, and it looks like there are better-quality windows installed. 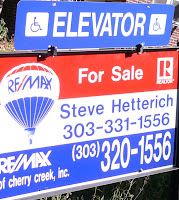 You can see they're aiming a little for Prairie/Wright. Here's the conundrum: The sign advertises that there is an elevator to make it handicapped accessible. But if they're aiming for accessibility (which I applaud), why are there at least eight steps up to the front door?

I didn't walk around to the alley to see what the back access is like, but even if that is level, would you as a handicapped buyer want a house whose front door you could never reach on your own? And how accessible is the interior, really? Bathrooms, sinks, counters, switches, etc. What do you want to bet not at all? 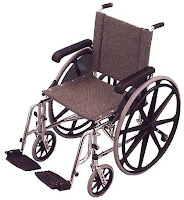 When I was in grad school, a wheelchair-bound friend came to visit, and I found a hotel near University Hospital that claimed to have accessible rooms. What they had, in fact, was an ordinary room with a lowered clothes bar and a raised toilet seat, the kind you screw onto an ordinary toilet. The phone was on a short cord across the room from the bed, the bedside light had a fiddly little knob up under the shade, and best of all, the bathroom door opened inward, blocking the (non-accessible anyway) tub and leaving fractions of an inch for wheelchair clearance.

For someone with serious motor-control issues, the room was a nightmare. I had to bring a long phone cord and a lamp from home, and we ended up calling the campus rec center in desperation after several days, asking if my friend could use the handicapped accessible shower there.

Even that had its pitfalls; as wide as the shower was, it was still too narrow for my friend to slide from her wheelchair to the bench. I tried to lift her over, but she weighed as much as me and we ended up on the floor, my friend sprawled naked on top of me. So we were lying there screaming with laughter and thank goodness the place was deserted, because I can't imagine what it must have looked like. We finally got ourselves untangled, and I managed to hoist her onto the bench for her shower, and the transfer back to the chair went much more smoothly

Builders and anyone else touting accessibility: PLEASE do your homework about what that really means. 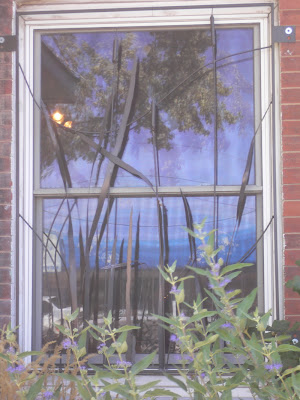 OK, rant over. Here's a rave: Cattails as security! Not super secure, being bolted on the outside and not very heavy-duty, but enough to deter your casual break-and-enter type, and way more attractive than ordinary bars. 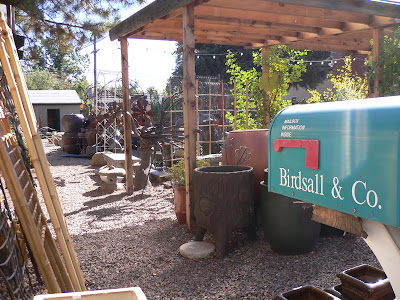 I'm not allowed to do more than window shop at Birdsall. Every kind of garden gewgaw, from the cheesy to the sublime. There's at least one fountain or pond feature in there with my name on it, but it can wait until I've set my yard in order. 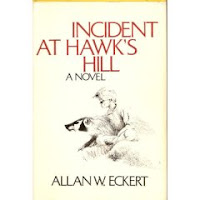 Finally, Sophie and I hung out in Gallagher Books. We had just discovered that the petfood store next door wasn't open yet, and Sophie trotted into Gallagher's in search of a drink of water. Her instincts were correct, as the friendly owner had a bowl behind the desk. We browsed a little, and I found a copy of a childhood favorite, "Incident at Hawk's Hill," about a lost boy and a badger. It's a weird little tale, and kind of grim. I seem to recall the boy is autistic or mute; I will find out when I read it again!

Gallagher's also sells really really gorgeous tiles that were salvaged mostly from British Victorian homes in Singapore. He offers the display space to the seller in return for help around the shop. I will go back some other time and get pictures of them.

I didn't think much of the pet food place, alas. It's big and has a lot of stuff, but what I needed were some soft or crumbly liver treats, and the owner wasn't very helpful. She sold me some very expensive buffalo liver treats, saying they could be crumbled. Yes they can, as it turns out, if you use a hammer.

So I guess I need to make a trip to PetsMart for more Biljac.
Posted by Kitt at 12:11 PM