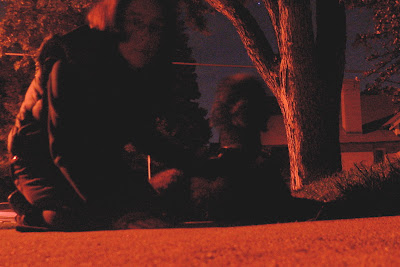 Up late last night, walking the dog and goofing around with the camera. Then up early today to greet the swamp cooler guy, who showed me how to winterize the cooler. The last one was easy; just climb up on the roof, drain the cooler and put a cover on it. With this one, I have to disconnect it from the furnace and cap the duct. Not hard, just fiddly. So that's taken care of. 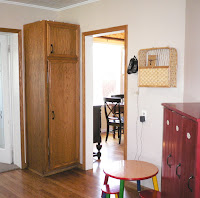 My carpenter, Pascal, is back from France, too, and came today to take precise measurements for the kitchen bookcase. Hooray! I can't wait to unpack my cookbooks.

The bookcase will go from floor to ceiling on the straight wall to the right of the door (this photo is from before I moved in) and across the top. We're going to slice the top door on the cabinet so it can still open, and possibly do something across the top to tie the look together.

Where the wall angles on the right we'll put some triangular shelves from the bookcase to the wall.

He's also going to brace the joists under the downstairs tub; the inspector noticed someone had cut them and they are twisting. The tub is probably OK to use, but I'm holding off.

Cast iron tub + lots of water + me = potential recipe for disaster if the floor is weak. That's a story I don't want to be telling.

Pascal plays guitar with the Gypsy Swing Revue. Click the link and listen to some of their MP3s.

Jason the Swamp Cooler Guy is in a band, too: U.S. Pipe & The Balls Johnson Dance Machine. They play funk and have opened for George Clinton.