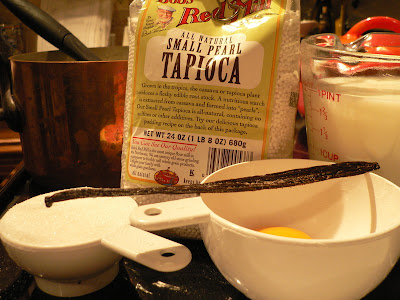 Despite all my paging through the vanilla cookbook, what I really have had a hankering to make since I saw the recipe was Heidi's tapioca recipe from 101 Cookbooks. Tapioca is comfort food for me. I usually make it from instant (which still requires cooking), but picked up some whole tapioca to do right by my first vanilla bean.

Unfortunately, my unfamiliarity with whole tapioca messed up my sense of when it was done. I kept stirring and stirring, waiting for it to reach the consistency I am used to. As Heidi mentioned in her notes, instant tapioca produces a more gelatinous pudding. I didn't really consider that as I was stirring away, waiting for mine to thicken up. And stirring, and stirring. I kept tasting it, too, and it tasted pretty good. But I thought the pearls were not translucent enough and the custard too soupy. 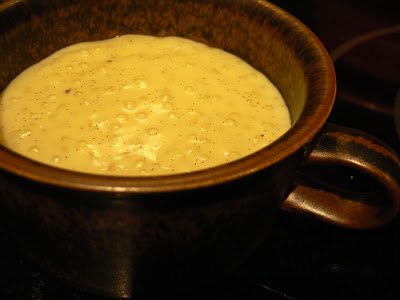 Well, it did finally thicken, but well past the point where I thought it had a nice taste. The consistency looked right according to my experience, but tasted overcooked, and when it had cooled a bit and I spooned it out it was like library paste, and very yellow. I'd cooked it far too long.

The taste was very vanilla-y, but the custard was definitely too done. And the volume was substantially reduced. Not a success.

I will have to try this again, soaking the pearls longer beforehand (half an hour was not enough, I think) and stop cooking it when it tastes good, instead of gauging it by density.