I love bacon. And I'm not alone. I even know self-proclaimed "vegetarians" who cannot resist it. But I don't understand the proliferation of bacon-microwaving gadgets. Is it really that hard to put bacon in a pan, turn on the heat and cook it? 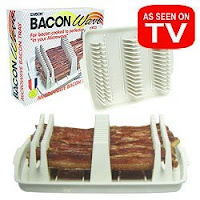 For me, part of bacon's charm lies in its crispiness, and the sound and aroma of it filling my kitchen: pop sizzzzzzzzle mmmmmmmmmmm.

Can you get that with this as-seen-on-TV Bacon Wave?

Or with the Cameron Cookware Mak'n Bacon? I think not. 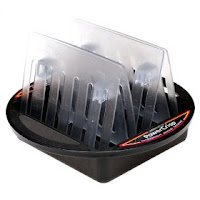 But it doesn't end there. No, there's still the Presto Microwave Bacon Cooker. They don't know when to stop!

And let me tell you about not knowing when to stop. I went on a bacon binge a few years ago. I started cooking it in the oven, a pound at a time. Just spread it on racks over a cookie sheet. So tasty. I would take a couple of days to eat it.

Then I got a cholesterol reading. Whoops! Lucky for me, as soon as I quit with the bacon binging, the bad reading dropped like a rock. 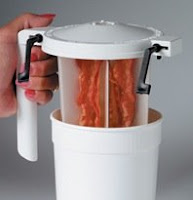 So in addition to finding the concept of microwaved bacon off-putting, I have no desire to find any method that makes it easier to cook the stuff.

Not even the WowBacon microwave broiler can tempt me. Even though it's fully enclosed! And eco-friendly! And only costs $20!

And comes with a promotional video! Just in case you're wondering how it works.

No, I love bacon, but I also know my weakenesses. I'll stick to special-occasion bacon, prepared in the traditional way.
Posted by Kitt at 6:09 AM