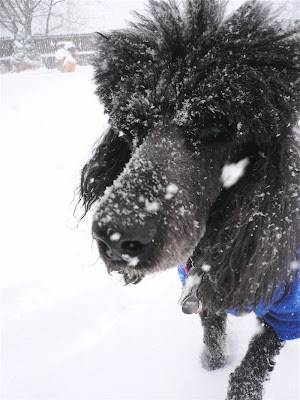 I was having a fairly leisurely morning, thinking, "Gee, this monster storm they were talking about sure isn't amounting to much." Then I tried to get to work early and it took me nearly two hours to get there. Total gridlock in the middle of the blizzard.

And then I'm sitting there in traffic, a block from the office, and the car in front of me is not moving, despite having many opportunities to do so. I get out, run up and see that the driver, an old guy, is slumped over the steering wheel. I yank open the door and shake him, "Sir! Sir! Are you OK?" He wakes up. "Huh, wha ...? I'm fine. I was just resting." 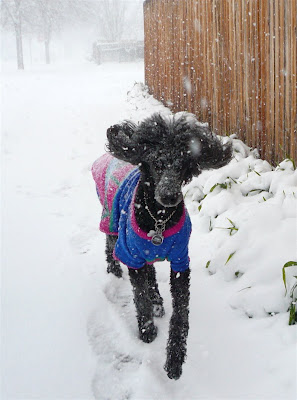 Well, he was either drunk or having some kind of medical crisis. I told him he needed to pull out of traffic at the next street. Which he did, then did a U-turn and got right back on the road. This while I was on the phone with 911.

I was able to jump out of my car again and go after him (traffic wasn't really moving), but he refused to pull over again. The police and paramedics couldn't do anything, they said. But they put his license plate on their "Be on the lookout" list, whatever that means. Sheesh.

Oh and my friend Jenny turned out to be driving right behind me when all this was happening. Small – and weird – world.

My commute home only took 15 minutes. There are some good drifts but I don't think we got more than 6 inches at my house.
Posted by Kitt at 1:20 AM