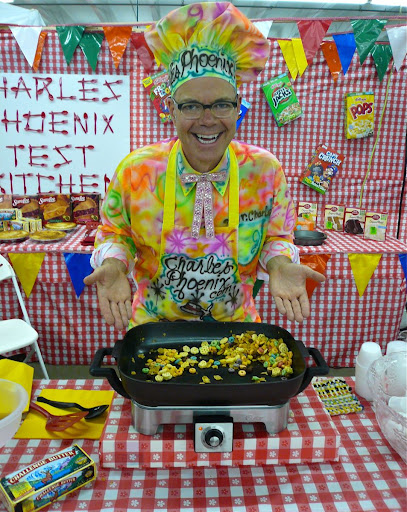 This weekend was the first Denver County Fair. Denver is both a city and a county, but doesn't have much in the way of a rural component. So the fair was pretty much about urban homesteading, with a high hipster quotient.

Sure there were some mini-goats, chickens and rabbits being shown, and judging of pies and preserves. But there was also a holistic pavilion, a concert by Devo (!) and this guy handing out fried cereal.

I thought he was just some random Denver wacko with a lot of enthusiasm for kitsch, but apparently he does this professionally.

Froot Loops fried in butter is one way to get everyone's attention (Day-Glo spray paint aside). I'm guessing a lot of kids are bugging their parents to try it at home now.
Posted by Kitt at 11:33 PM