Sophie and I expanded our range a little today (2.1 miles!) by wandering over to the other side of Broadway, where there's a narrow strip of blocks before the train tracks, occupied mostly by industrial-type businesses, some auto-body shops and the occasional cluster of tiny, tumbled-down Victorian cottages. I noticed a sign in front of one of those cottages, next to the alley: The Missionary Church. 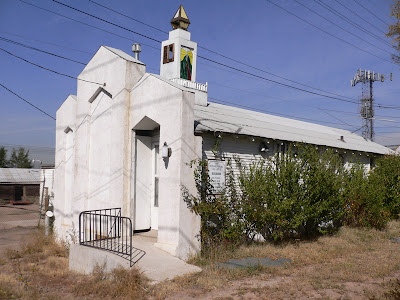 Walking down the alley, I found this. It's a little homemade church, with an incongruously new sign with hours of services, and no other information. The train tracks (freight and light rail) are are about 100 yards away. 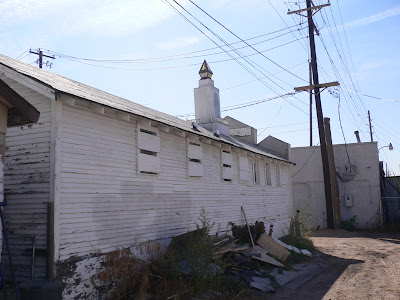 As luck would have it, there was a guy working in his garage next door, who told me the woman who lives in the cottage out front is a preacher of some sort, and has a flock of seven or eight old folks who come to services. He didn't know what flavor of preaching she does.

I can find nothing online about it, except one mention on a local religious cable channel's website, that the preacher's name is Dorothy Groblebe. I may have to investigate more.

The guy in the garage thought it was funny I was walking my dog there. "I usually go over to your side of Broadway because there's too much broken glass over here."
Posted by Kitt at 12:21 PM