I got this recipe from Yasou over at Cooking 4 the Week. Saw the recipe and knew I already had everything I needed to make it: 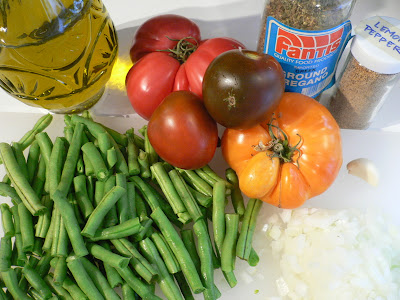 Well, except for fresh lemon juice to put on it at the end. A dash of lemon pepper would have to do.
One really great tip (or grate tip) is Yasou's method of prepping tomatoes for sauce. Instead of going through the whole blanching and peeling process, she suggested cutting the tomato in half through its equator and then grating it on a box grater. You just moosh the tomato with your palm to get all the way down to the skin.

You get a bowl full of pulp, and the tomato skin protects your skin from the grater. I didn't seed the tomatoes first as Yasou suggests, in part because I'm lazy and in part because of this post from Harold McGhee at Curious Cook about tomato flavor. 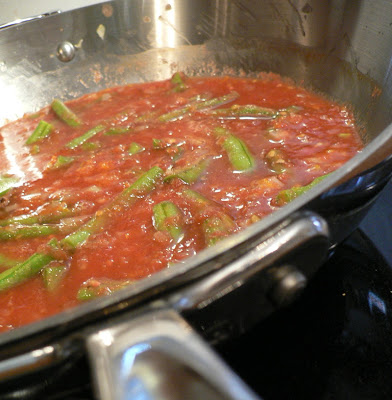 There was only one problem I had with this dish, and that was that my beans were older and tougher than they should have been (they were cheap, though), so I had to cook it longer than I had time for. I left them sitting on the stove last night, and started simmering them again this morning. I also added a pinch of sugar to counter the extra acidity from the seeds.

I'm also tempted to fry up some bacon and add it, chopped up, just because I'm in a bacon-y mood, and serve it over pasta.

So maybe it's not really Greek green beans (or fas-o-lakia me lathi, according to Yasou's mom) anymore?

I also realized I was not going to get around to cooking and eating the corn I bought in time, so I blanched it and cut the kernels off to make corn soup later.