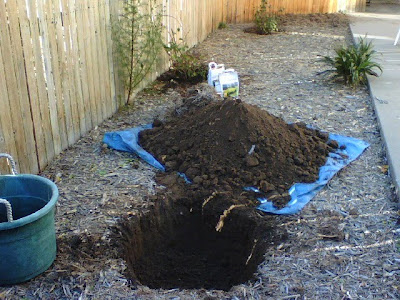 Besides blogging, I have also gotten out of the habit of taking pictures of everything, which means I don't have a Before picture of the silver lace vine.

A gal on my gardening listserv offered it up, having decided it was too vigorous a grower for the small space she had it in. You can see from the photo at right (from a Dutch site) that it's quite the climber.

So I drove up to Boulder, hacked it back and wrestled it out of the ground with her help and planted it next to a fence that could use a crown of greenery. That's it planted in the middle background, against the fence.

In the foreground is the hole I dug for a Frontier Elm, which I'm getting from the city for $25 as part of their shade tree program. I wanted a Linden, but they were out, darn it. Still, this is supposed to be a nice, smallish tree that turns burgundy in the fall. Tree pickup is tomorrow morning.

And while I was at it, I planted a bunch of daffodil and allium bulbs.