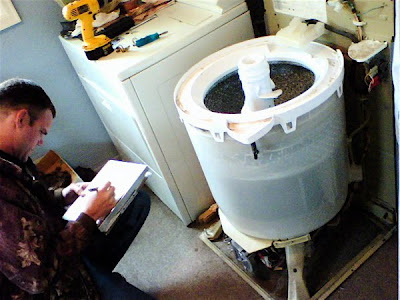 Household appliances seem to know when it's the optimum (i.e. worst) time to fail. In this case, it was the washing machine cringing before the onslaught of laundry day, when I had about five loads lined up and the time to process it all.

Instead, I was on the phone to a repairman to come find out why the darn thing wasn't spinning.

One $25 coupler and $100 of labor and service call charges later, I was back in business. I had no idea you could just undo a couple of screws to remove the entire casing from the front! It gave me the opportunity to clean all the grime from under the edges and around the drum, at least. The repairman said I was pretty lucky to get 12 years of washing out of that machine without repairs, and now should have many years more.

In South Dakota I would leave my stuff washing at the laundromat and go run errands. A couple of times I came back late and found someone had folded it! Here I would not be so lucky.
Posted by Kitt at 10:26 PM