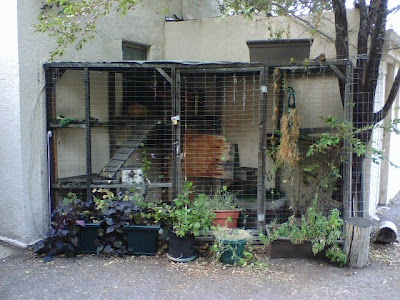 That's the name of a store on Pearl Street that carries everything you could want for your feline friends. They also carry dog food, including the fancy stuff the poodles eat (which costs twice as much as Sophie's food and gets consumed twice as fast, there being two of them).

I was in there the other day and remarked that I didn't see any cats around. "Oh, they're probably out back in their habitat." Well, I had to go see that. Potted plants, stuff to climb on, and a "den" with a heating pad inside. It's a wonder I ever see the cats in the store at all.
Posted by Kitt at 11:51 PM