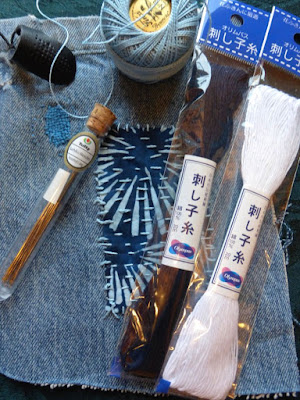 I've been researching Japanese boro and sashiko sewing techniques as an option for repairing my holey jeans. Sashiko is an attractive embroidery technique that's not super-complicated, and it might make the jeans looks trendy rather than just ... patched.

I also ran across a darning tutorial on imgur, so I thought I'd experiment with that, too.

Once upon a time, darning was a skill most women learned as children, and many men, too. I always thought it entailed just sewing a hole shut, or sewing over it. But it's actually weaving.

I cut a swatch from an old pair of jeans to practice on. The first hole I cut was too big, so I cut a second, smaller one and tried darning it with denim thread. Hmm, that didn't work very well. The thread was too fine. So I stopped halfway through.

I cut another small hole and used No. 8 crochet cotton with a sashiko needle (which is longer and sturdier than a regular embroidery needle, with a bigger eye).

That actually turned out pretty well! That will be a good option for fixing small rips in denim or other things.

For larger holes, especially if the fabric around them is weak because of wear, patching with sashiko stitching is an interesting effect. If you have to patch, you might as well do it stylishly, right?


I like the way that turned out, too. I folded the patch fabric so there were no raw edges, and whipstitched around the outside. I started to do the lines of sashiko stitching freehand, then realized I'd better mark the fabric with chalk. Next time I will try to map out my edge stitches, too.

It was interesting figuring out how to hold the needle and use the thimble. (This video, while not the best quality, shows how to hold maneuver the needle. Skip to 3:17.) 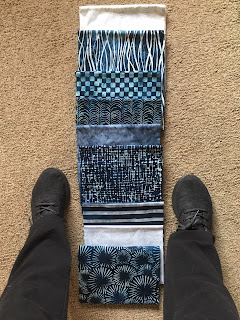 In the end, I also had to get some pliers to pull the needle through the mulitple layers of denim and quilting cotton. That's probably not standard.

A friend told me about an iron-on stabilizer called Cloud Cover that is designed to cover the rough stitches on the inside of an embroidered garment, so I ordered some. Soon I'll have those pants repaired!

I have this variety pack of blue batik-y fabric that should be suitable for all kinds of projects using sashiko stitching and boro techniques. I did a Google image search for "Boro" and have been exploring all the pages that come up. It's also fun to try using the Japanese characters for sashiko (刺し子) and boro (ぼろ) and explore that way. But I find that Google Translate really struggles with those pages, so I don't get as much out of them as I would like.

The Sergeant and I are hoping to go to Tokyo for a week or so just to explore. He went there for work last year and really liked it. I was jealous!
Posted by Kitt at 5:00 AM