"Get Out" Movie Sneak Preview 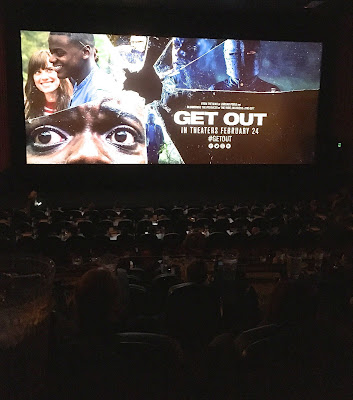 One advantage to seeing movies at Alamo Drafthouse as often as we do is the invitations to free screenings. Tonight we went to an advance showing of "Get Out," which will be released in most theaters this weekend.

It's billed as a horror movie, but it's more psychological thriller, directed by Jordan Peele of Key & Peele fame. The story is about a black guy and his white girlfriend going to visit her parents in their rich suburb. It becomes clear pretty quickly that there is something very weird and very wrong going on.

I'm not generally a big horror movie fan (though Silence of the Lambs is one of my favorite movies), but I thought I'd take a chance on this one, it being free and all. It sounded somewhat intelligent, and it was. There was a lot of sly humor and social commentary. And the horror came with some twists I was not expecting.