The Pokémon Go Plus came out in September. It's a Bluetooth device you can wear on your wrist or carry in your pocket that lets you play the game in a limited fashion without having your phone open all the time. It vibrates and flashes green if there's a Pokémon nearby, and if you push the button, it launches one Poké Ball, then lets you know if you captured anything. It flashes blue if there's a Pokéstop nearby, and collects items from it when you push the button. 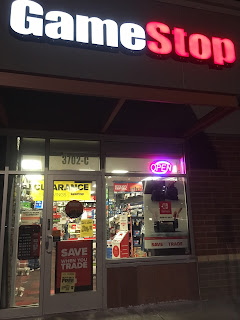 I couldn't really see the value in it; I was still enjoying playing the game on my phone. What's the point of just clicking a button blindly?

You see, the device has been consistently sold out everywhere since September. Sure, you could buy one for $150 on eBay, but the thing retails for $35. Places like Game Stop would occasionally get a shipment, and sell out in hours. So I hustled over and bought one.


It took me a little while to figure out the thing's quirks. The Bluetooth connection can sometimes be flaky; you have to tell your phone to forget the device, then re-pair it. It will only throw regular Poké Balls, so if you run out of those, you're out of luck (even if you have lots of Great Balls and Ultra Balls). If you get an egg from a Pokéstop, you can't tell unless you check your phone. 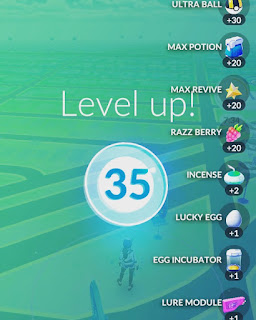 But it has some advantages, too. If you don't want to be staring at your phone as you walk, if you're in a hurry or if the weather's bad, you can still get credit for all the steps you're taking, and maybe catch some Pokémon and hit some Pokéstops along the way. If I need to check my email or make a call while I'm playing, I don't have to shut down the app entirely; it can run in the background.

As a result, I was able to hit Level 35 about three weeks ago, and I'm already a third of the way to the next level, even though you need more and more points to advance. In this case, I need 1.5 million points to reach Level 36. There are 40 levels in all.

What I'm really hoping is that Niantic (the company that launched the game) will add the next generation of Pokémon characters to the game. That will make it interesting again. But until then, I'll keep clicking that button. The game helped me lose 10 pounds, after all, plus gained me the admiration of my geeky peers.
Posted by Kitt at 6:00 AM