The Wimminfolk and Their Needlework

The Sergeant had a birthday party Sunday that involved an engine swap, loud music, a lot of grease and broken tools. Meanwhile the gals came prepared to knit or stitch, mainly because the topic of sashiko came up in a Facebook discussion beforehand. Turns out Amanda had recently bought sashiko supplies, as had I, and Mona was curious about the technique. 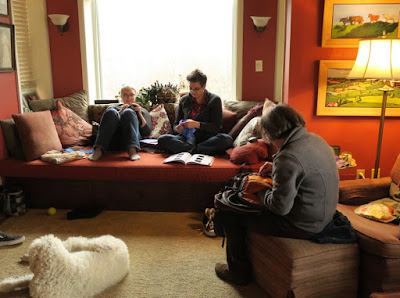 Not pictured is Jenny, who brought along something to learn how to darn on, but which turned out to be not very darnable — a backpack that a squirrel had gnawed holes in. I did a little sewing to close up the holes, but really, it needed a patch. So I patched it: 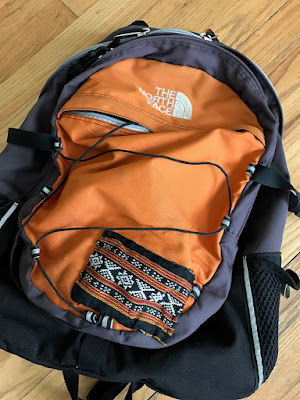 I had this little square of fabric that matched nicely, and it sure looks better than the duct tape Jenny was going to use. I put some of that Cloud Cover fusible on the inside to protect the stitching from snags. 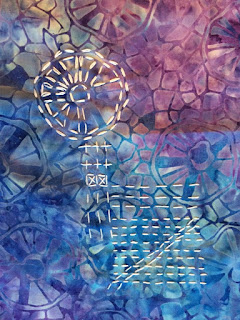 Meanwhile, Mona was playing around with the sashiko needles and thread on a piece of batik from my stash. (I have so much batik quilting cotton, it's a little embarrassing.) She sent me this photo later.

I like the idea of stitching to outline some of the patterns on the fabric. I need to play around with that on the jeans-patching I plan to do. Possibly as soon as today (we have a new little sewing club at work that meets at lunchtime on Fridays).

Amanda was the stitching star of the party. Turns out we'd both ordered the same sashiko book and needles from Amazon, but Amanda had also ordered indigo linen from fabric.com and marked up grids to practice stitching patterns from the book.

Meanwhile, I'm still reading the introductory chapter. But I'll get to the actual stitching one of these days! 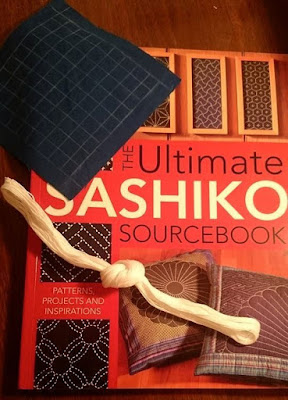 These little squares could become coasters or bags or even denim patches. I'm tempted to order some linen myself, but I've got an upcoming trip to the Bay Area that might include a trip to Japantown. So I'm restraining myself until then. I have plenty of other projects I can play with in the meantime.
Posted by Kitt at 5:00 AM

Email ThisBlogThis!Share to TwitterShare to FacebookShare to Pinterest
Labels: Sewing