Community Supported Agriculture (CSA) has been around for a while. I remember splitting a CSA share with a friend of mine maybe 15 years ago. What I remember about it was that it was Too. Much. Food. And it was usually too much of one thing and not enough of others, like three dirt-encrusted rutabagas, a carrot, two radishes and 20 ears of corn.

I was cooking just for me back then. I didn't know what to do with all of it, and a lot of it ended up in the compost bin..

Then a couple of weeks ago Grant Farms gave a presentation at my company. They can deliver a small vegetable share, with sensible quantities and variety, directly to the office once a week. I decided to sign up. I've been making a concerted effort to cook healthy dinners for the Sergeant and myself most nights, and it's working pretty well, but I need to get better at menu planning, and I'm looking for inspiration. 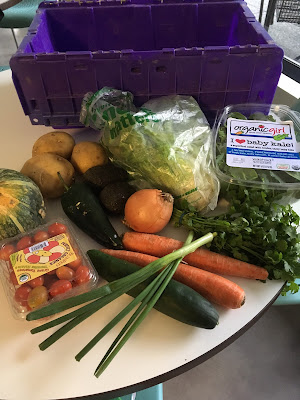 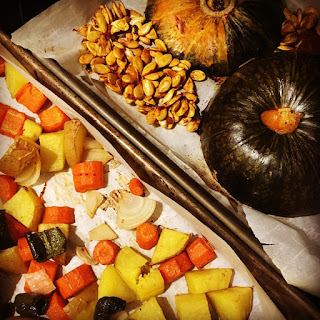 That's not an unreasonable amount of food for two people to consume in a week (nor too much for me to carry home on the train). Some salads, a pasta dish, maybe, and in a pinch, roast all the things that can be roasted.

Which is what I did on Sunday, because the Sergeant was out of town. I had some of the veggies for my dinner on Sunday, and the rest went into Monday night's yellow curry with shrimp for the two of us, along with the baby kale.

I used The New York Times' Shrimp in Yellow Curry as my starting point. I sautéed the aromatics, added the curry and red pepper flakes, then stirred in the extra vegetables before adding the coconut milk. I used the whole can, too, since I was adding a lot more stuff to the dish. 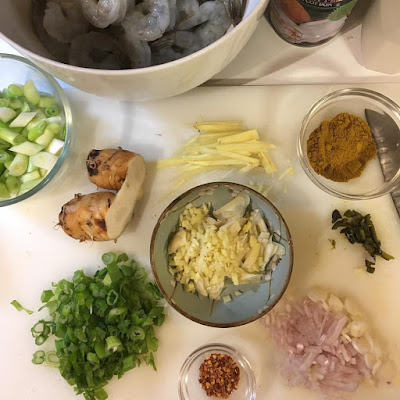 No shots of the finished dish, alas. We were both starving, so I was hustling to get it on the table. I have leftovers for lunch, though, so maybe I'll add a photo tomorrow.

It turned out quite well, albeit rather on the spicy side. I added some of that roasted poblano, minced, which turned out to have a lot more heat than I was expecting. Plus the red pepper flakes are made with peppers from our garden, including Thai bird chiles. Whoops. The rice helps temper the heat, though.

The roasted squash I'm going to turn into a Winter Squash Gratin for Wednesday's dinner, with a little diced ham added. Tuesday night we're going to see "Beasts of the Southern Wild" at Alamo Drafthouse, so we'll eat there. I haven't thought about Thursday yet, but another CSA box will arrive with something I can work with.