Dinner at Sunflower in Boulder

Before last night's show we stopped for dinner at Sunflower.

I'd never been, but Jenny suggested it, and I also saw it got a good review from Claire at Culinary Colorado. We didn't have a reservation, but didn't have to wait more than five minutes to be seated.

Lovely crusty rolls covered with poppy and sesame seeds arrived promptly, along with a butternut squash puree to spread on them. Tasty, though I think butter would've been better.

We started with a cheese plate: manchego, Spanish bleu, goat cheese and a dauphine (I think). At the time I thought "I should write these down." But oh well. 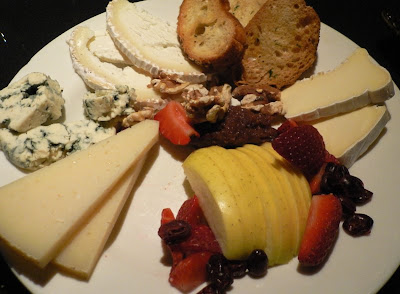 It was all quite good, along with a red-onion jam, dried cranberries, apple slices, strawberries and walnuts. A few crostini, but we were also brought more soft rolls, which I preferred.

The same plate, after 20 minutes, was as empty as it could be. 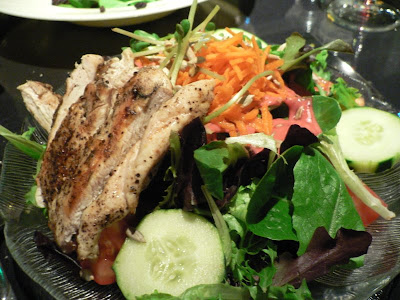 I was tempted by many things on the menu (the salad Nicoise, the venison tenderloin, the bamboo steamer of vegetables, noodles and chicken with coconut-peanut sauce), but the recitation of the specials distracted me. I opted for a bowl of Rhode Island seafood chowder (with bacon!) that was hearty and hot, and nicely spiced. On the peppery side, but not more than I could handle. Very filling. 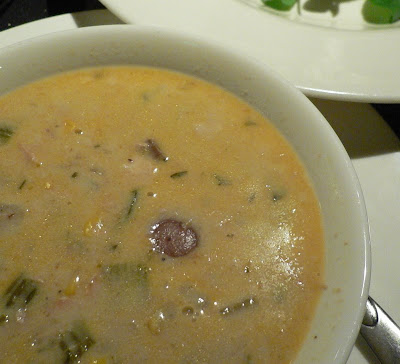 To balance it, I had to have the salad of sliced pink lady apples with watercress, red currants and ginger dressing. I got the dressing on the side and I'm glad I did. The flavors of the fresh fruits and watercress were so bright and clean. A little dab of dressing was good, but I didn't use it with every bite. 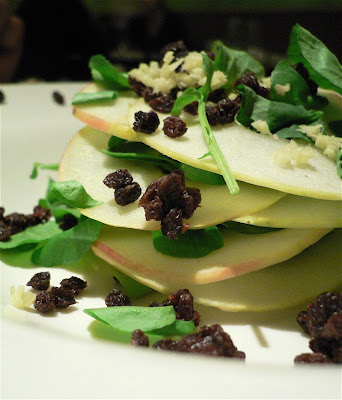 Wow, that was a really good dinner. I had a glass of Spanish brut cava with it (I like bubbles), and Jenny chose a Carneros pinot noir (Mont Saint John).

We still felt full hours later. And I was glad there was water readily available at the concert, as that chowder and cheese left me with a powerful thirst. Small price to pay, though.

Speaking of prices, Sunflower is not cheap, but you get good value and service for what you pay. It's a good place for special dinners when you're willing to spend a bit more and take your time.