Even though spring is here, the snow and chill have me still in braising mode. Those short ribs I made two weeks ago were very satisfying. 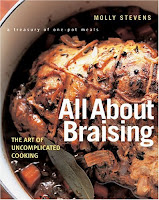 This week I wanted something a little lighter but still hearty. Leeks are looking particularly lovely these days, so I turned to Molly Stevens' "All About Braising" for her braised leeks and halibut recipe.

But. And it's a big but, that halibut. The recipe says 2 1/4 to 2 1/2 pounds of thick halibut steaks. People, do you know how much fish that is? More important, do you know how much that costs?!? Take a guess. Go ahead, just off the top of your head, how much would you expect to pay? I'll answer below this photo. 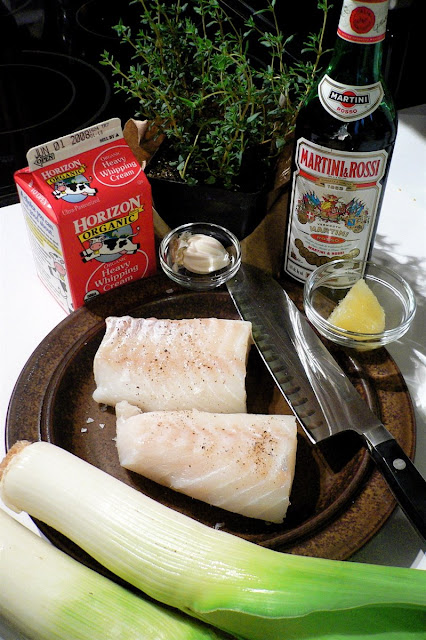 Halibut is $20 a pound. So this recipe calls for $50 worth of fish. Um. No. I like halibut, but I also like cod. Hello, Alaskan cod, my affordable friend.

This is a pound of cod for $12, which will be two nice dinners for me. Still a little on the pricey side for home cooking, but I could have cut this in thirds as well for three meals. These are pretty chunky pieces. Two pounds of fish would have been way too much. So I just used a smaller pot.

(Like halibut, cod is a nice firm white fish that doesn't taste too "fishy," and the Pacific kind is not overfished, according to the Monterey Bay Aquarium Seafood Watch.)

The fish steaks or thick fillets are salt-and-peppered and set aside. Preheat the oven to 350. You trim your leeks, dice them and rinse them several times in a bowl of water to make sure all the grit's out. Melt about 3 tablespoons butter in an oven-safe pan that has a lid, add several cloves of garlic, minced, and about a tablespoon of fresh thyme.

(Since it's spring, I just bought a thyme plant and snipped off what I needed. I'll put the plant in the ground shortly.) 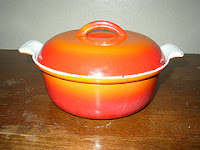 Add the leeks, stir to coat with butter, then pour in a half-cup of white vermouth or dry white wine, bring it to a boil, then cover the pot with a round of parchment paper and the lid and toss it in the oven for 45 minutes, stirring once in the middle. (This is the pot I used, a 2-quart Descoware bought off eBay.)

Then take the lid and parchment off, put the fish on the leeks, pour a quarter-cup of heavy cream over, and put the pot back in the oven for 15 minutes with just the parchment over it, no lid.

Then you take the fish out of the pot again, debone it if it's a steak and meanwhile put the leeks back on the stove and simmer them for another 10 minutes or so until the sauce is more saucy than soupy. Add a big squeeze of lemon juice (or in my case, a melted cube of juice from those California lemons).

Serve the fish on top of the leeks with a nice green salad on the side. 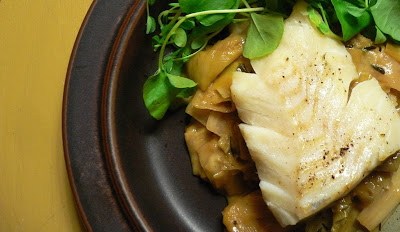 This was surprisingly easy, despite what may seem like a lot of steps, from stove to oven to stove. It's really not complicated, doesn't call for a lot of prep, and the ingredients are easy to come by. Except, silly me, I used regular red vermouth instead of dry white, so this came out a little on the sweet side. Not overpoweringly so, but I suggest you don't substitute. Happily, the lemon juice added a little zing to balance the sauce.

The fish was moist and firm and tasted delicious. This is saying something, since I hated fish when I was growing up (I had issues with the bones). Funny how our tastes change.
Posted by Kitt at 9:11 PM