So I bought a couple of leeks at the SF farmers market as big as my arm. (Much like the kale big as my head.) I loved the braised leeks with cod, and I still had some heavy cream left from that (minus a splash or two in my coffee – wicked rich). I also had some sliced ham in the freezer, left over from the holidays. A nice gratin seemed just the ticket. 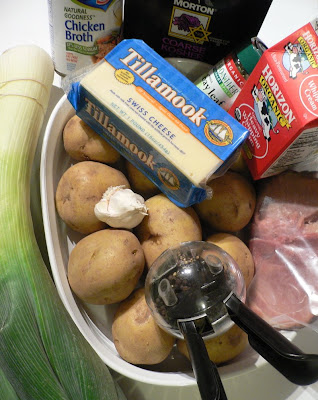 Here are the ingredients:
You put your liquids in a pan with the bay leaf and the garlic clove, bring it to a boil, then take it off the heat to steep while you prep everything else. Preheat your oven to 350.

Once you're done with all that peeling and slicing (boy, I sure do hate peeling potatoes), you layer everything in a gratin dish or casserole:
First a a third of the potatoes, then some salt, pepper and nutmeg. Then half the leeks and ham. More potatoes, more spices, the rest of the leeks and ham and a final layer of potatoes. 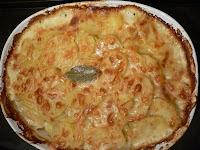 Pour the cream over it, discarding the garlic, sprinkle it with the cheese and bake loosely covered with foil for half an hour. Then take the foil off and bake for another 30 to 45 minutes. I basted it halfway through, just spooning some of the liquid from the sides to the top. I don't know that it was really necessary.

Oh! I just looked out the window and it's snowing. Criminy.

OK, this is a good hearty dish for a cold, snowy day! Sorry, the photos aren't so great. It was the middle of the night and I just wanted to eat and go to bed after spending many hours weeding and cleaning house. 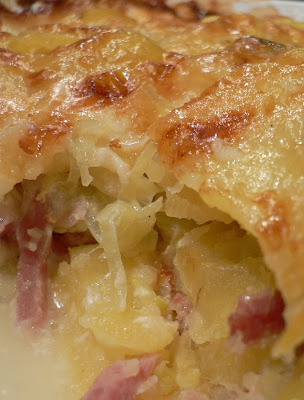