A different kind of no-knead bread

Kris posted on her blog about "Artisan Bread in Five Minutes a Day," with the recipe for the basic dough, as opposed to the sweet brioche dough I already used to make caramel pecan rollsand chocolate almond challah. (She also has videos in her later posts.) 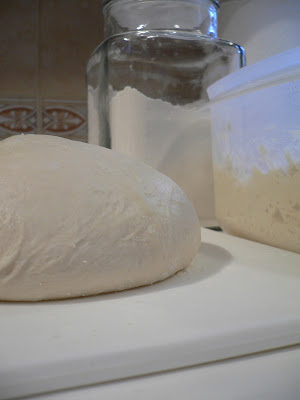 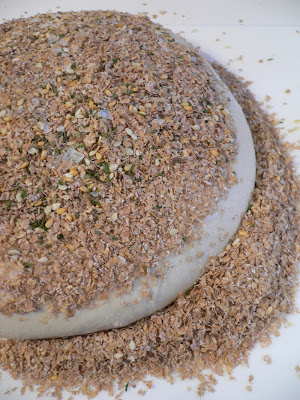 Today I cut off a hunk of dough, shaped it and let it sit for 40 minutes, then topped it with wheat bran, spicy sesame mix and salt. The recipe doesn't call for toppings other than flour, but I wanted to see how it would taste compared with the no-knead bread I'm used to making.

Also, the recipe says to put the dough on a pizza peel with cornmeal, then slide it onto a heated pizza stone and put a broiler pan in the oven with water in it. I don't have any of those things. But really, the whole dutch oven technique is supposed to duplicate the moist heat of a bread oven, so I just did that instead, cooking it at 450 degrees for 20 minutes with the lid on and another 10 uncovered. 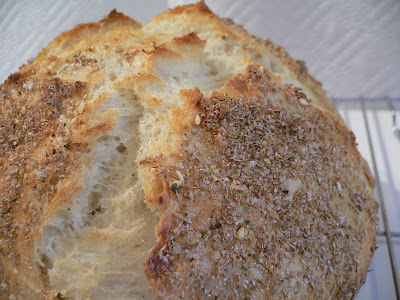 Hey look! It's a nice, crusty loaf! This is indeed more convenient than the other method, since you can make a big batch of dough days in advance, and then make several loaves as needed throughout the next week or two.

I'll experiment with the next ones in shape and possibly fillings. Thanks, Kris! And thanks, too, to "Artisan Bread" authors Jeff Hertzberg and Zoë François.

P.S. My parmesan long loaf variation came out great. And the red-pepper gruyère rolls? Stellar! And then there's the Nutella bread. Ohhhh my.
Posted by Kitt at 12:57 PM