Dead and gone, but not entirely

With the city forester breathing down my neck, I was forced to say yes to the tree trimmers' choice of today to bring down my doomed silver maple. 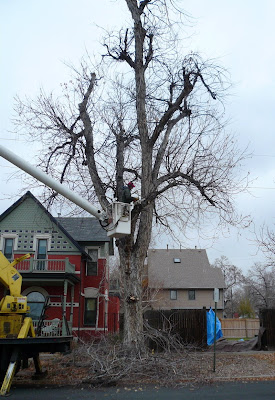 I had to forgo a couple of things I'd planned for the morning, including a meetup with Jen and Manisha, dammit. But I needed to be home to supervise. 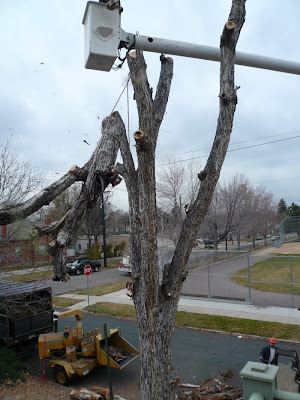 Martin and Javier were sympathetic and speedy. They joked a lot, with Martin up in the tree and Javier on the ground, belaying the larger roped pieces and feeding branches into the chipper. 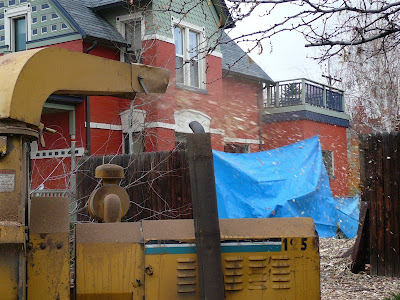 I removed a fence panel and set up a chute of tarps. Commercial mulch is expensive, and I liked the idea of recycling what I could. 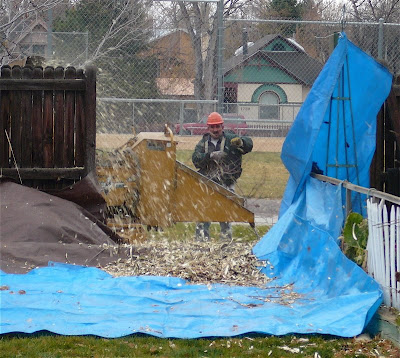 As you may recall, the tree had a beehive in it, about 12 feet off the ground. What I did not know was that there was another hive up high. It was in the branch you see falling here, I think. 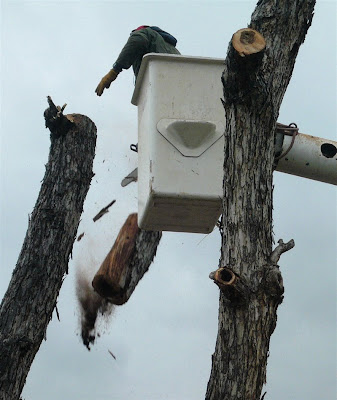 The branch split when it hit the ground. Those poor bees. 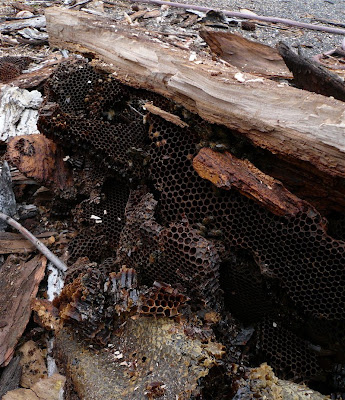 I was in danger of falling logs myself, so I didn't get a better shot than this blurry one of the actual bees. 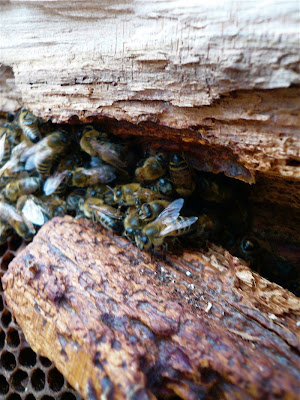 It was a small hive, but they'd laid in a supply of honey. I tasted little bit of it. 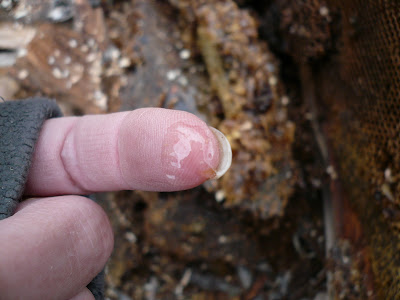 The choice of day proved fortuitous. Yesterday it was 70 degrees, and the bees would've been active and angry. Today it was 35, and the poor things succumbed quickly to the cold. They crawled and flew in slow motion, then curled up and died.

A squirrel lost its cozy nest, too. This branch was filled with shredded leaves, and squirrel snacks of pumpkin from my mulch pile, where I'd thrown my jack-o-lanterns. 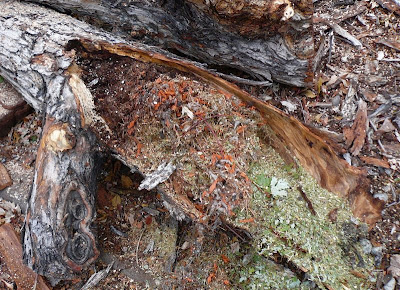 I feared that the broken hive was the one I knew about, tunneled through the trunk to the high branch, but Martin found that hive farther down. He cut below it and dropped the section. 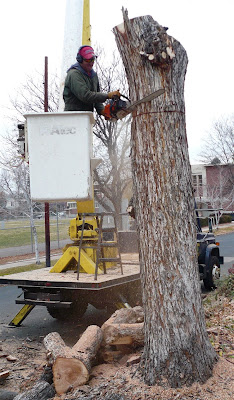 I threw a sheet over it to keep the bees contained as much as possible. The section was too big to roll, but Martin trimmed off a solid chunk on one side. 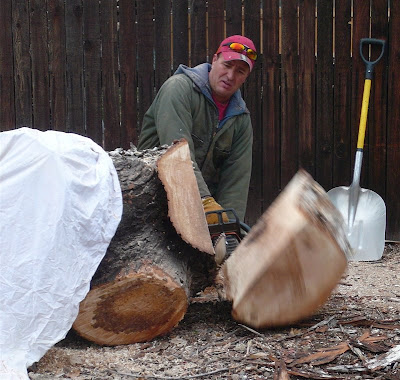 The guys who showed up to take the bigger wood helped roll the whole thing into my yard. It took all their strength, and they were probably cursing me a little. But they were good-natured about it. 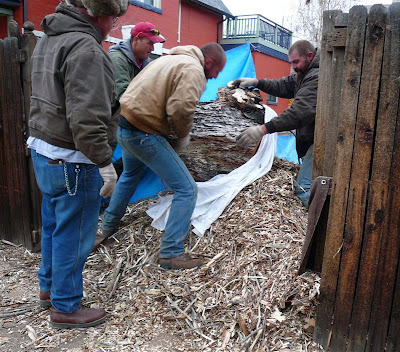 They didn't get the section into the raised bed as I'd hoped, but close enough. I should mention here that the City Council on Monday night voted to allow backyard beekeeping! While this probably isn't what they had in mind, I made sure the hive met the position requirements: as far from the neighbors as possible, at least five feet off the lot line, and behind a six-foot barrier (my fence). 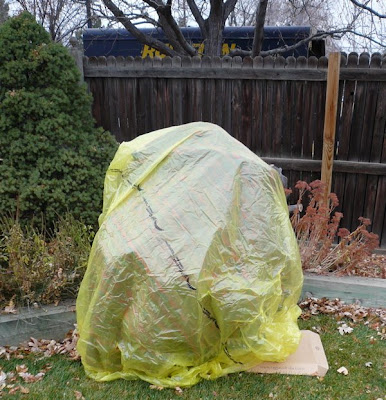 I covered the trunk with an old wool rug and plastic, leaving a small escape hole above the hive entrance. The entrance was packed with bees. I could hear them buzzing loudly in the confined space, and there was warmth rising from the hole.

I hope they can seal up the hole at the top of the hive where the trunk was cut. I hope they can survive the trauma of their jarring fall, relocation and loss of who knows how many workers. More warmish days are coming, so I'll investigate whether I can feed them as ordinary beekeepers sometimes do.

Meanwhile, the log crew fired up their winch and loaded their truck. 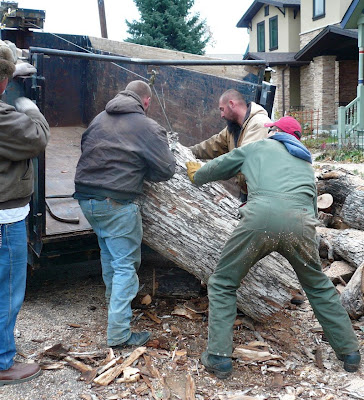 They filled it to capacity. 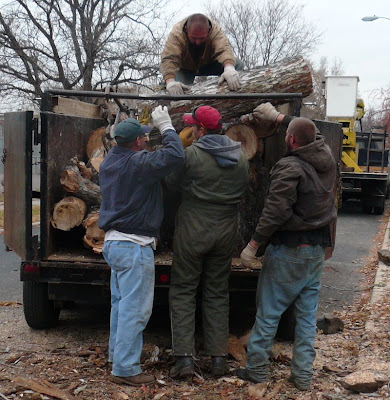 This is Martin, taking a well-deserved rest. Javier is behind him. 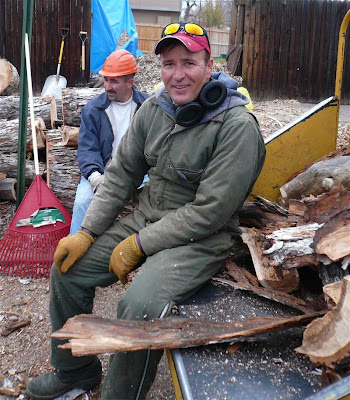 And this is all that remains of my once-mighty maple. 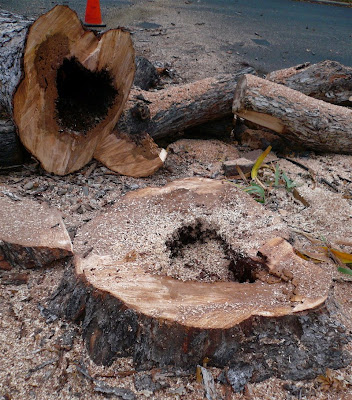