This morning I saw a guy walking slowly down the sidewalk across the street. He walked up to the stop sign and started reaching up. "Oh no!" I thought. "Another tagger! God damn it!"

Then I realized he was cleaning the sign. A schools employee doing his part to wipe out graffiti. I went over and told him about my experience yesterday. He laughed and said, "Good for you! Thank you!"

Whew. I'm not so confident of my ability to scare off adult taggers.

Meanwhile, my next-door neighbors have a problem with another kind of urban eyesore: pigeons. 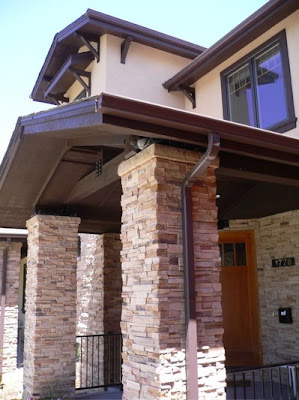 This place was just built last year, and I count it among the styles of monster duplexes I abhor. Not only is it ugly, it has all kinds of nooks and crannies where pigeons love to roost. 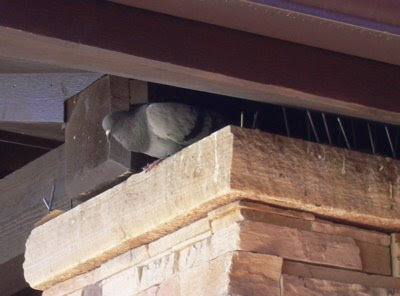 I turned the guy on the far side onto BirdSpikes.net, and the ones he installed seem to be doing the trick. 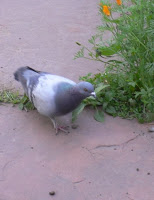 The folks on this side, though, tried to make their own, with nails pushed through cardboard. As you can see, they're not making much of a difference.

As soon as the nests were removed, the persistent pigeons started fluttering down to gather more bedding. Flapflapflap down. flapflapflap up, all day long. There's pigeon poop all over the porch, and the constant coo-coo-cooing right outside the bedrooms drives the residents nuts.

Neighbor borrowed a ladder today to put in some more spikes. 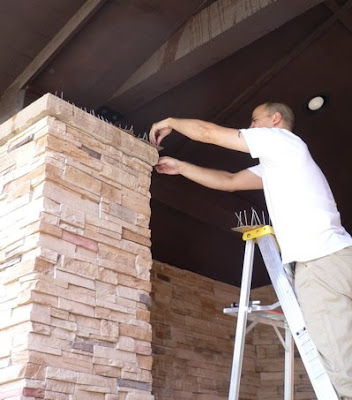 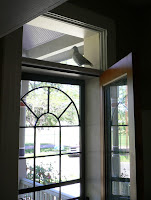 As soon as he went back inside, the pigeons returned, scoping out the changes, finding new nooks and adjusting accordingly.

Conversely, there's only one place on my house where a pigeon could conceivably roost out of the weather, and that's already occupied by one mute and unmoving fellow who causes no problems at all.

It occurs to me that I never named him. Any suggestions?
Posted by Kitt at 11:16 AM