We considered going back to Legendary Palace in Oakland today, but I saw some good reviews of East Ocean in Alameda, which is closer to home and has more parking. Crucial when temps are already close to 90.
At 11 a.m. the place was already full up. Five minutes later and we would have had to wait. (While it's best to do dim sum as a group so you can try lots of dishes, you can often get a seat more quickly at a two-top that's been squeezed into one of the gaps between the group tables.) 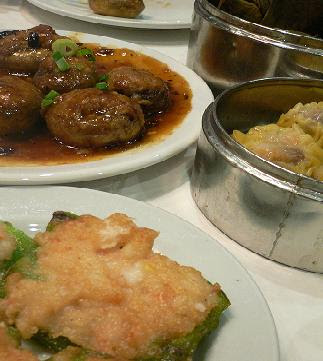 As usual, we were loaded up with dishes within three minutes of sitting down. The service is very fast! And friendly, though it would've been nice if I spoke Cantonese. My Mandarin didn't go very far here. 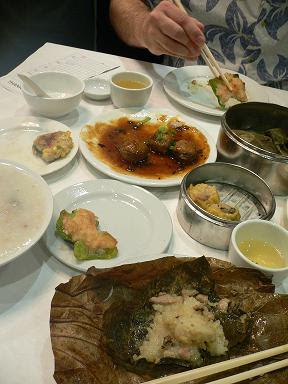 I never know what half the stuff is, but most of it is pretty good. I should've skipped the congee (too filling), but I brought the leftovers home. And there was something wrapped in leaves, like Eight Treasures Rice, but very greasy and meaty, that wasn't so great, so we left the third one there.

The mochi with custard filling for dessert was quite yummy. I could've gotten two orders of that, but I would've popped.

Nine dishes and two Cokes came to $35, so it's a little pricier than some dim sum places, but still competitive. For the location and cleanliness factor, it was worth it. And as you can see from the top photos, it's quite popular.

(It was kind of an ordeal putting this post together on an unfamiliar computer, and I couldn't go through all my photos easily, so I'll stick with cellphone posts until I'm home again.)
Posted by Kitt at 2:23 PM