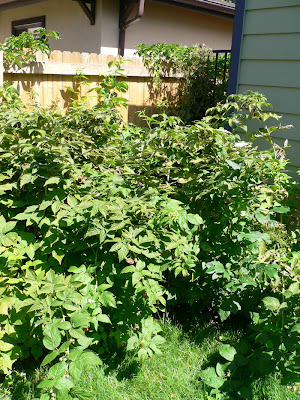 You may remember me threatening last fall to pull out the raspberry canes in the back corner of my garden because they had not been planted with a root barrier and were laying siege to the adjacent beds and lawn. A lot of the berries in the back went unharvested because I couldn't get to them at all. They seemed like they were going to be more trouble than they were worth.

Noooooo! many of you cried. Don't do it! 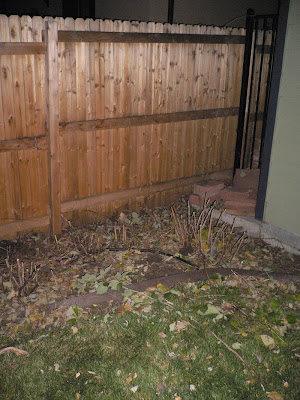 I wasn't really familiar with how raspberries grow, though; I hadn't realized that they need to be cut back completely in the fall anyway. Once I started pulling out the advancing troops by the roots and hacking back the overgrowth, I found there were four main clumps in the original planting. I named them all Audrey and told them they could stay, if they promised to behave. 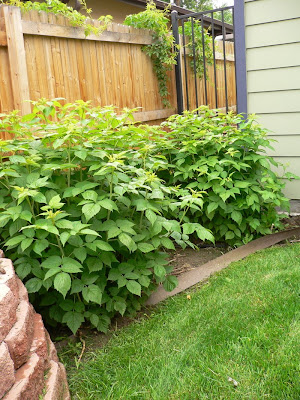 As you can see, the Audreys did not suffer from their multiple amputations. But they're still plotting their escape. This weekend the root barrier is going in, and I've been careful to rip out every outlying shoot. These measures should, I hope, keep them in line enough so that I can harvest their fruit from the front and the back without having to don full protective gear. And the adjacent grass and flowers can breathe easy.

In other berry news, the strawberries gamely continue to produce at the other end of the lawn in spite of some water issues I failed to address (namely: they weren't getting any). 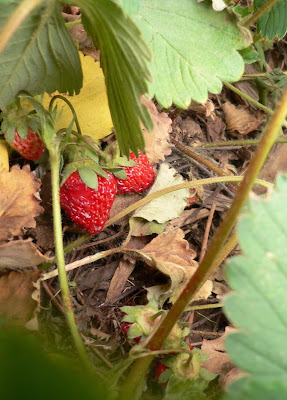 The parents died off, but their children moved closer to where the sprinklers were hitting (or maybe it's normal that the older plants disappear? must research). They're a little easier to keep out of the grass, so I will try to get some more water in the direction I want them to grow.

This is all a lot of work! But it's nice to know that such labor does bear fruit. And tasty fruit it is.
Posted by Kitt at 7:29 AM