Living on the edge
(and why you should wear gloves)

I said I was going to put a new root barrier around the raspberries last weekend, but finally got around to it today. After a nap. 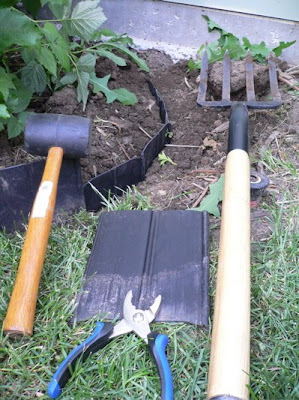 This pound-in edging is from Gardeners Supply Co. I bought it 10 years ago and used a fair amount at my old place, but had enough left over for this little job. I use the digging fork to get way down in the soil and rock it side to side, then use the mallet to pound the edging into the loosened soil.

But I'll be using the pliers to pull much of it out again and dig still deeper. You can see it went in nicely on the right side, but as much as I pound on the stuff to the left, it's not going in as deep as I want. So I'll do it again. Not such a little job after all. *sigh* 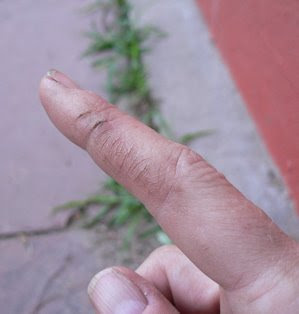 And then there's this other problem I have: a really bad case of weeding finger. Gardeners, don't let this happen to you! I hate to wear gloves because I can't feel what I'm doing, but as a result I've got some severe callusing, complete with embedded dirt that won't wash out. Ew.

I'm thinking maybe I could get some surgical gloves and cut the fingers off to make a kind of sleeve for my index finger and thumb. Meantime, I may be sleeping with cotton gloves filled with moisturizer for a while.
Posted by Kitt at 8:23 PM