I wanted to see how Cutie's milk would work in pudding, and I've had my eye on Deb at Smitten Kitchen's Best Chocolate Pudding ever since she posted it in February (for Valentine's Day, natch). 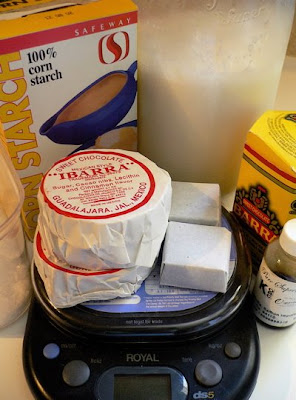 I doubled the recipe because I had a lot of milk and time was a-wastin' (more on that later). The doubled recipe calls for 12 ounces of semi-sweet chocolate. I had a couple 1-ounce squares of that, and also some discs of Mexican chocolate, which has cinnamon and sugar added. I cut the sugar to about 3/4 cup to compensate.

Only one problem: that Mexican stuff is pretty dang hard! 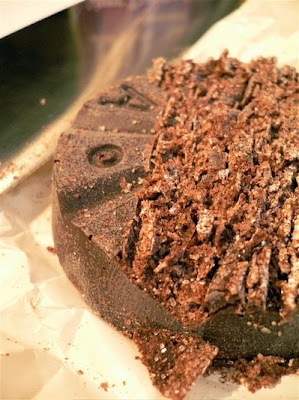 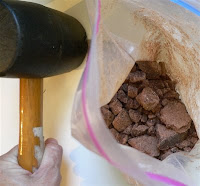 I started to chop it, but only scratched the surface. Not wanting to mess up my cleaver, I resorted to my trusty mallet. Many good whacks later, the chocolate was in smaller chunks.

Combine the sugar, corn starch and salt, then whisk in the milk. You then heat the milk in a double boiler over simmering water. You can make your own double boiler with two pots or a pot and a metal bowl. I like using a copper bowl because it seals well with the pot and you can gently stir the mixture quite easily without missing any spots on the bottom. Thick copper is good for a nice, even heat. Here's a perfect example of why you should set your white balance. The photo on the left is lit by some overhead halogen lights, the incandescent under the range hood, and some daylight coming in the window. Without setting my white balance, the photo looks jaundiced. But by pointing my camera at the milk and telling it, "This is white," it adjusted nicely. 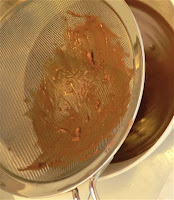 With this amount of milk, it takes twice as long to thicken. Half an hour to 40 minutes, stirring regularly. You may want to whisk it, too, if it gets lumpy. Once it coats the back of a spoon, mix in the chocolate and stir/whisk for a few more minutes.

I was pretty sure there weren't any lumps, but I sieved it anyway and then added the vanilla. There were indeed a couple little lumps of cornstarch. It wouldn't have been terrible, but the sieving made the pudding extra silky.

I ended up with eight generous servings: 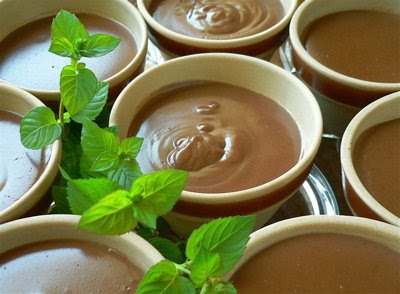 Now, this pudding tastes quite good! I probably could have cut the sugar even further because of the sweetened chocolate, but it's not overbearingly sweet. I also think I didn't put enough corn starch in. I didn't pack it down when I measured. It's pudding, but not as thick as I would like. 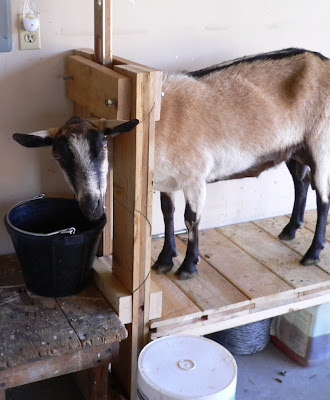 Unfortunately, though, I think I waited too long on using Cutie's milk. As noted before, her milk starts to get a little funky after a day or two. I waited three. While the pudding tastes just fine when you're eating it, there's a distinct goatiness that lingers in the back of the throat when you've finished.

Since I'm trying to find recipes to use her milk to best advantage, I'd say this one will work just fine provided it's made on milking day or the day after. Her milk is also being frozen, and this might work with that, too.

Of course, you can use store-bought milk. If you like chocolate pudding, you'll love this recipe. Thanks again, Deb!

Other recently tested goat-milk recipes:
lacto-fermented sauerkraut (with an update here)
honey vanilla ice cream
Raspberry ice cream
ricotta cheese
And a great use for the ricotta:
Ricotta torte with squash, corn and dill
Posted by Kitt at 12:24 PM