Whoever came up with that "death and taxes" saying forgot to include weeds. Like battleship sailors who start painting at the bow, work their way to the stern, then start all over again, I could weed from one end of my yard to the other, but I would never be done. 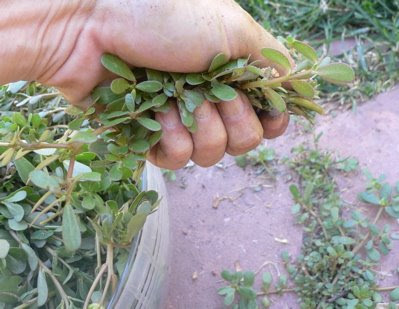 But as I mentioned earlier, my bumper crop of purslane, at least, can be treated as just that, a crop. Inspired by doggybloggy's helpful video, I did some weeding today with the salad spinner handy.

Prepping the purslane is time-consuming and fussy. But hey, it's free food, so just go with it. You need to wash it, wash it, and wash it some more. It's a prostrate plant and you've pulled it out by the roots, so there's a lot of dirt there.

Then you need to strip it, grasping the thick stem and pulling off the leaves. The little stems and branches are OK to leave in, but the thick main stem and roots are bitter. Here's what I ended up with, leaves and small stems on the right, big stems and roots on the left. Note the bindweed that tried to sneak in. Damn stuff is insidious. 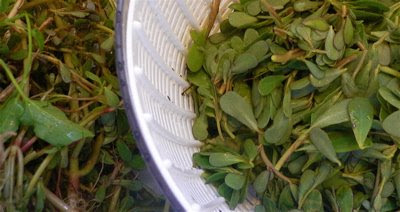 Then I washed it some more in a big bowl of water, turning it around and around to make sure I'd gotten out all the stray bits of grass and small roots (which are pink, thus easy to spot).

Finally, it was ready to cook. I cut up some slices of bacon and cooked those first, then added the purslane with a generous squeeze of lemon juice and sauteed it over medium heat for about 15 minutes, until it was thoroughly soft and tasted done.

I served it over bowtie pasta. 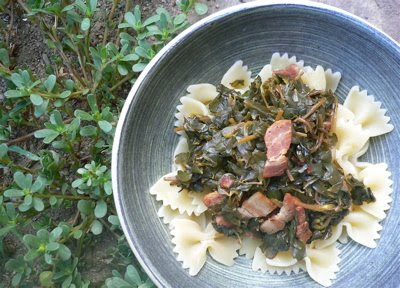 It tasted green, with a little tang, and it tasted like bacon. It tasted good. I'm not sure it really worked with the pasta; I'm thinking maybe polenta would be better, or as a side dish with mashed potatoes.

The huge amount I prepared worked out to two or three servings. I found out at the last minute that the fireworks party I was going to was a potluck, so I didn't eat much. I saved the rest for dinner tomorrow.

What did I take to the potluck? The only portable food I had handy: Cokes and a bag of Pirate's Booty.
Posted by Kitt at 12:19 AM