It's hard to capture how very laden my tomato vines are. 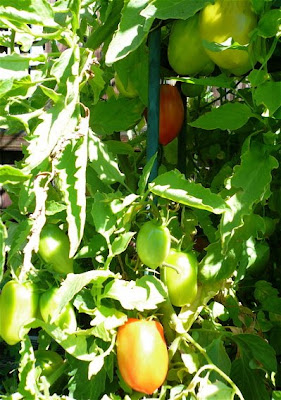 While many tomatoes have ripened, there are still dozens and dozens of green ones that I hope will be ready to pick before the first frost. Even then, I know the harvest will not be done. I'll try the trick of uprooting the vines and hanging them upside-down in my garage, where the fruits can continue to ripen.

Well, I say I'll do that, but it may be tricky with so many sprawly vines tangled up with each other and the trellis.

I've already made one batch of stellar sauce, but it only came out to seven individual portions that I've frozen. So now I'm making more. 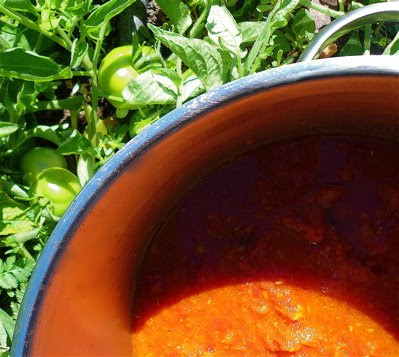 I roasted a batch of my own tomatoes and a batch from the farmers market with garden herbs for 10 hours in a 170-degree oven (as low as it will go) until they became a super-concentrated goo (tomato paste, essentially).

I added these to a well-cooked puree of two large onions, four carrots and four celery stalks and about six cloves of garlic, then threw in about eight more pounds of Romas from Costco that I'd peeled, cored and seeded. I also added a box of organic vegetable broth. This has simmered on the stovetop for two days.

This morning I minced and fried a bunch of slab bacon and browned a pound of ground Angus beef, also from the farmers market, and added it to the sauce. It'll cook a few more hours yet. I'll mince some more herbs and cook them in a little, then cool the whole thing and freeze it in small portions.

It takes a lot of time (mostly unattended, happily) to make this sauce, but in the middle of winter I'll be glad for it!