Architecture: You're doin' it wrong 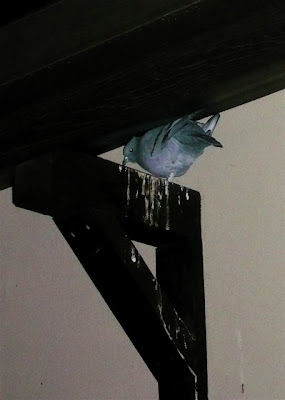 I've posted before about my neighbors' problems with pigeons (and my own worry-free avian friend). Most of the time the pigeons like to hang out on top of the pillars by the front door. They build nests up there, too, and no amount of shooing chases them away for long. Nor do homemade bird spikes.

At nightfall, though, the pigeons seek out spots that are more secure for roosting (I'm guessing a raccoon could climb a pillar pretty easily). But they don't need to go far. In addition to the pillars, the builder thoughtfully included little decorative struts along the roof line, under the eaves. Ah, perfect! 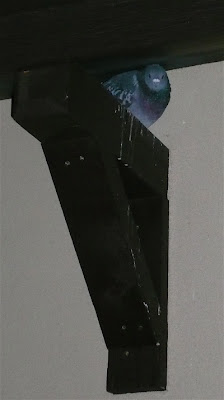 It takes a fair amount of flapping and false tries for them to get up there, but once they're there, they settle in for a night of pooping and an early morning of cooing and burbling right outside the bedroom windows.

The neighbor on the other side invested in commercial bird spikes and borrowed a 28-foot ladder to get them up there. The cooing at 6 a.m. was driving him crazy.

Now new tenants are moving in on this side. Let's see how long it takes for them to go battty, too.
Posted by Kitt at 11:08 AM