Strangers in the night 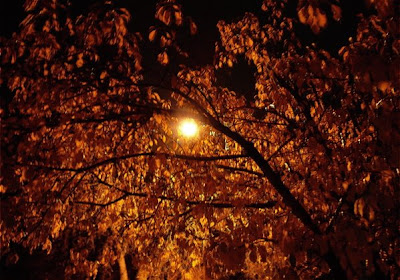 Sophie and I walked 1.15 miles this morning. Enough walking for an old dog? Nope. Home from work, I was greeted by leaping and spinning and multiple attempts to rescue Timmy from the well (i.e. concerted efforts to lead me to the treats in the kitchen).

It had rained earlier and the air was chill and misty, so I put on a hat and gloves and we headed out again, for another 1.3 miles. 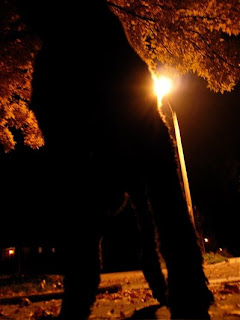 Sophie frolicked the whole way, which I always find encouraging. I was hoping to catch a glimpse of the Orionids meteor shower, but the sky was hazy, and it was probably too early yet. It's supposedly best just before dawn.

Near the end of the walk we passed a guy out with his Tibetan mastiff and said hello. At the next corner I made Sophie stop so I could try to capture her silhouette against the streetlight. I crouched down, bracing the camera on the sidewalk, and took a few shots, but heard footsteps. The mastiff-walker had doubled back.

It probably looked like I was ill, maybe doubled over in pain or something. Or it just looked strange.
Posted by Kitt at 12:02 AM